Nowadays. Current bands are Lemonade Sin, The Fallen Women, Keith TOTP. Let's see what 2023 brings! I also like to do my songs where I sing/play guitar, annual or bi-annual gig it seems.


2017-pandemic. I've played for The Fallen Women, Keith TOTP, Micky C and the Sad Sad People, Argonaut... and lots of birthdays, weddings, and parties too. Did a solo record, and got old Linus stuff digitalised online.

2012-2014 I was finding my feet looking after Drummybaby, but also managed to squeeze in roughly 8 gigs a year for a lot of the bands below plus a one-off substitute drumming spot with Joanne Joanne.

In 2011 I played with The Monochrome Set. Did a show, a radio session, drummed on their album in the first half of 2012, another radio 6 session, and a festival show.

I also played a while for Small Crew. Quality indie pop, great tunes.

I have been lucky enough to drum a few times with Keith Top Of The Pops And His Minor UK Indie Celebrity Allstar Backing Band, which was literally show up, start playing, and get to know the musicians who did the gig with you afterwards! Lots of fun.

I also played with the Deptford Beach Babes a few years back. Great fun to play in the surf style, with sunglasses and grass skirts, naturally.

The New Royal Family was legendary. What a blast that was - the "last ever" show was a storming one at the Buffalo Bar on 13th Feb, 2010. We were all quite emotional by the end.. Note - we've done a few 'reunion gigs' since then. :-)

The the Low Edges were another band I was in for a few years. I played for them from 05-07. They were country-punk, a bit like the Violent Femmes (though they claim never to have heard them!). Peter moved up north, and got fed up with always schlepping down south to play the fragrant venues of Shoreditch. There's an excellent recording - the single that never was - I've shared it with you all here. The singer, James, is now in the excellent Dog Unit.

I played a gig in '07 drumming for the the Dreamers, which was Kevin Wright and Sarah from Action Biker. It was a lovely show at the Luminaire, with a friendly audience, and we only had 2 rehearsals!

I played some fun shows as part of the lovely The Mystery Fax Machine Orchestra in '06-'07. They're still going, check them out!

I recorded a few sessions for Horowitz, who have produced an LP out of it! I had an occasional band called the Shallows, a 2-piece with Andy Roberts, but sadly we only played 2 shows. In 2008 I played for the Monochrome Set at the Cherry Red 30th anneversary party. 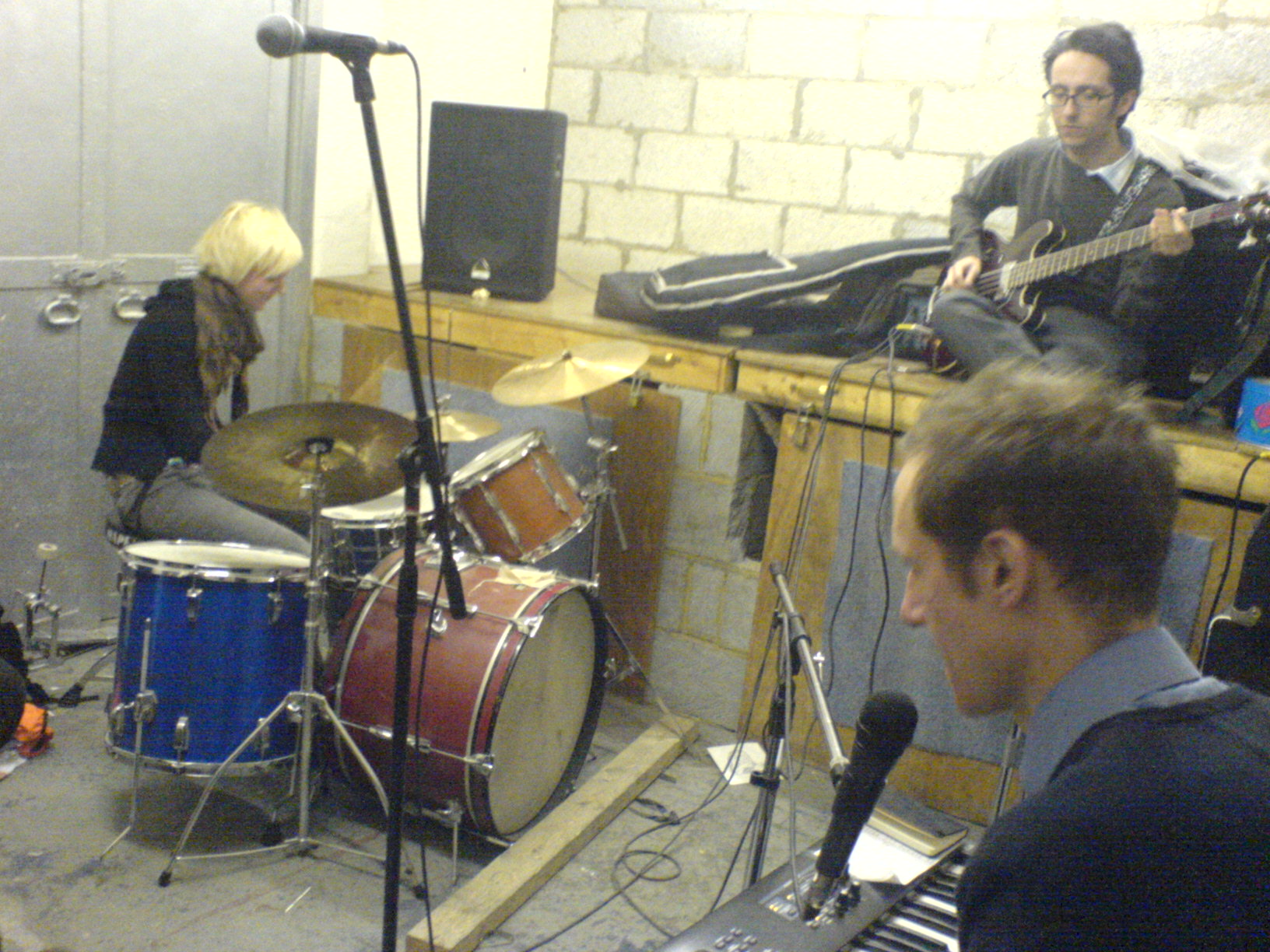 Some other drumming jobs

A few years after my drumming epiphany I was still wavering between Bass and Drums, playing drums for a sonic youth-y band and a goth band, and bass for an acoust-o pop band which lasted a summer only.


The autumn of 2003 saw me rehearsing with Picture Center to help them out with an album launch gig.


Conrad Vingoe was the guitarist for the summer's bass playing band. He asked me to drum and play bass on his demo in December 2003. I think he's doing good things in South England..

I also joined a group called Faster, who played REM-y type songs with energy and passion. Unfortunately, the d�but gig with me never happened, as the venue we were booked into burned down a week before the gig. an omen? But they were really sweet guys, and thanks to them for letting me put some tracks I drummed on up on the Recording page.

I played with The Debutante until mid '06, who played tuneful country/pop/rock with added flute&violin. A really nice bunch, too.

So I spent a few years as a bass player..Mostly for 'Riot Grrl' band Linus but also some other stuff after I left in '96. If you're still reading this and want to read about that, well, go here.